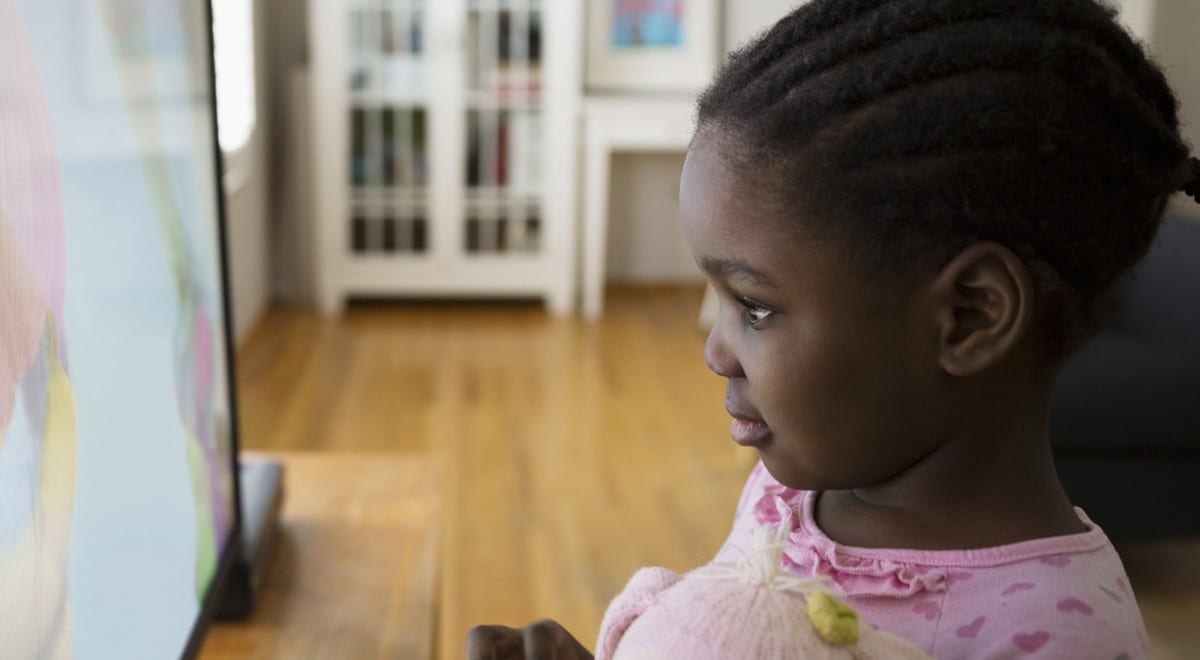 Kids ages 2 to 5 should spend no more than one hour a day watching television or using tablets and other digital media devices, according to new guidelines announced Friday by the American Academy of Pediatrics (AAP). And screen-time should be avoided completely in even younger kids, with the exception of video-chatting.The recommendations also say that how and when kids are using these devices is just as important as total time spent. Playing interactive games or watching high-quality programming with your kids can be beneficial, say the authors. But plopping them down in front of the television while you cook dinner—or handing them your iPad when they get antsy at a restaurant—may be just the opposite.

Yes, many parents rely on digital media to keep their kids occupied when they can’t give them their full attention. And there are specific instances when it can be helpful, says Jenny Radesky, M.D., lead author of the statement—like on a plane or during a medical procedure.

“I have been so grateful for movies or apps on my phone when I’ve been stuck in the emergency room with my son, sitting at the airport with flight delays, or trying to get them to stay calm during a blood draw,” Radesky, a developmental behavioral expert and pediatrician at University of Michigan C.S. Mott Children’s Hospital, told RealSimple.com. “However, I do feel that handing a child a mobile device when they’re crying or upset may not be helpful in the long run.  First, it may reinforce the negative behavior, as the mobile device may be seen as a ‘reward.’  The child thinks, oh great I’ll do that again next time!  Second, it distracts the child from what they were feeling, rather than letting them feel it, express it, and get some help from an adult problem-solving around it.”

Research shows that, in children over 3, high-quality programs like Sesame Street can foster learning. But less is known about their impact on younger children. “Under 3, toddlers’ immature brains have a hard time transferring what they see on a screen to real-life knowledge,” Dr. Radesky said in a press release. “We don’t yet know if interactivity helps or hinders that process.”

“What we do know is that early childhood is a time of rapid brain development, when children need time to play, sleep, learn to handle emotions, and build relationships,” she continues. Excessive media use, she says, could get in the way of that. It’s also been linked to poorer sleep quality and physical health, and increases in body mass index.

The new guidelines include other recommendations, as well, that aren’t so different from what experts recommend of adults: banning digital media use an hour before bed, turning off devices when not in use, and keeping bedrooms and mealtimes screen-free. They also recommend testing apps before using them with your children, and avoiding fast-paced programs with distracting content or violence.

And while parents should limit screen time with young kids, they don’t have to banish it completely. The important thing, Dr. Radesky says, is to interact with children during digital-media use, to help them apply what they’re seeing on the screen to the world around them.

“Video-chatting with grandparents, watching science videos together, putting on streaming music and dancing together, looking up new recipes or craft ideas, taking pictures and videos to show each other, having a family movie night … these are just a few ways media can be used as a tool to support family connection,” Dr. Radesky says.

Parents may want to cut back on their own screen time, too: Dr. Radesky’s research has shown that smartphone use around kids is associated with higher stress levels and fewer parent-child interactions.

“These new recommendations are not meant to be a guilt-inducing decree, but guidelines for what the research evidence and our clinical judgment suggest will help kids establish healthy media habits,” she told Real Simple. “Parents should apply them however they see them working for their individual family.”

The AAP also released a statement today on digital media use for children 6 and up, which recommends placing consistent limits on time spent using media and making sure media doesn’t take the place of adequate sleep, physical activity, and other behaviors essential to health. Both sets of guidelines will be published in the November issue of the journal Pediatrics.