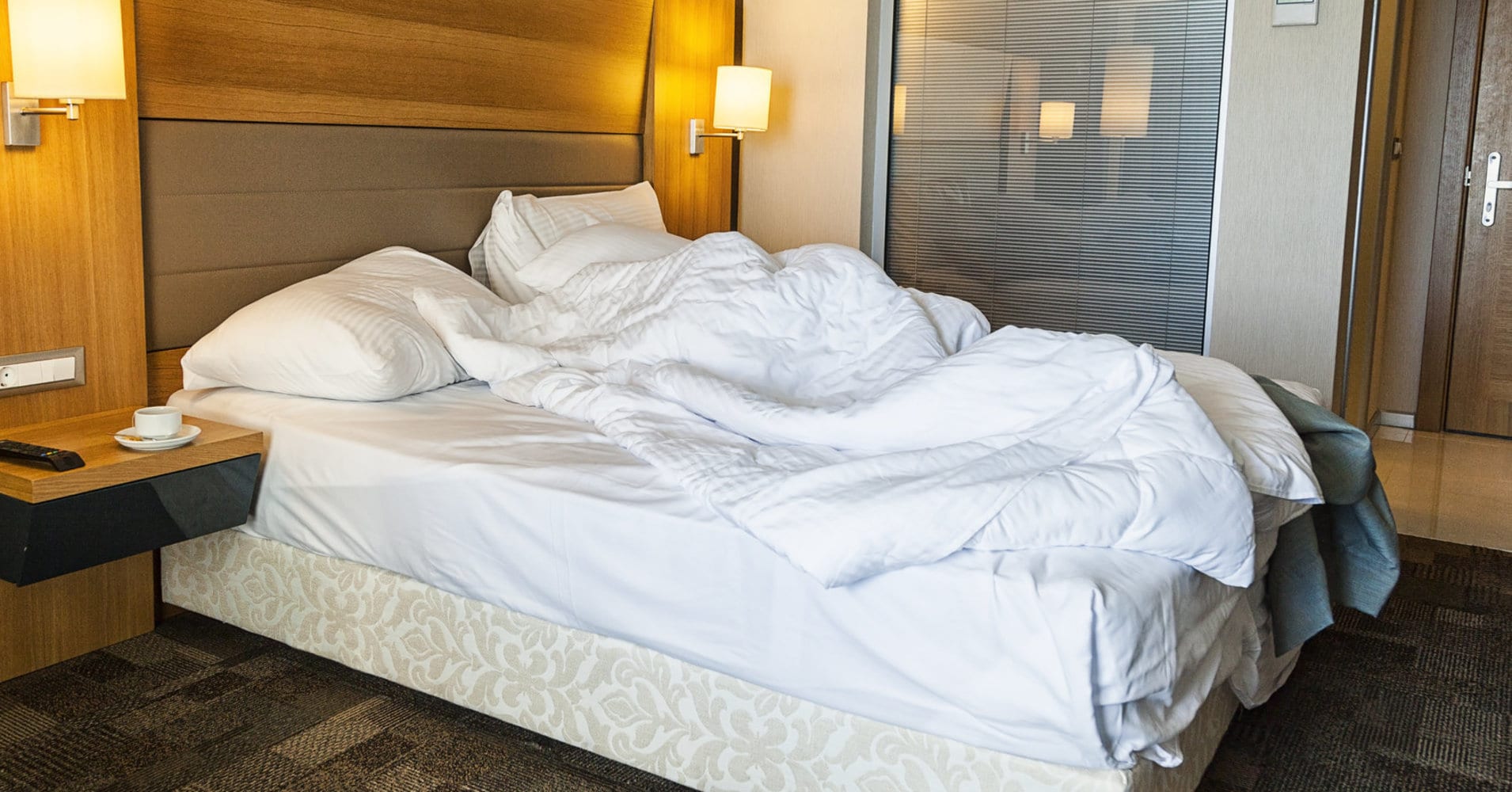 Whether you’re a self-proclaimed neat freak or are totally fine with letting dirt, grime and clothes pile up in your home all for the sake of making it to Saturday-afternoon brunch, we all can agree cleaning is no fun. In fact, keeping clutter out of the home is seriously stressful, especially when it’s on top of all of the other to-dos we have going on in our life. According to one online survey, a whopping 84% of recently stressed Americans say they worry their home isn’t clean or organized enough. If we’re stressing that much about something most of us want nothing to do with, that might mean we’re not doing it enough to being with. We took to the experts to find out which common household items we’re not cleaning enough and what it really takes to kick the germs out.

Sheets and bedding: once a week

Even if you’re the only one snoozing in your bed, it still needs to be cleaned—and much more often than you’d think. “It’s a good idea to wash your pillowcases and sheets at least once a week to avoid transferring bacteria, oils and other impurities from your pillow to your face as you sleep,” says Joel Schlessinger, M.D., board certified dermatologist and RealSelf advisor. “Your skin and hair leave oil and other buildup on your pillowcase that can lead to breakouts, inflammation and irritation.”

And those who shower just before crawling into bed at night aren’t off the hook, as various shampoos and conditioners can also leave buildup that sits on your sheets and pillowcase. Considering the fact that more than a third of people wait 14 days before washing their sheets, the message isn’t clearly getting across. “To avoid breakouts, fungi and illness, hit the laundromat or switch out your sheets weekly,” says Dr. Schlessinger.

Many people think bath towels are clean because we use them to dry off after we’ve just scrubbed down, but these towels accumulate millions of dead skin cells and other particulars after just a few uses. If they’re not aired out properly, bath towels can also develop a musty scent (sound familiar?). “Ideally, you want to switch to a clean towel after three uses,” Dr. Schlessinger says. “It’s also important to never share your towel with another person, which could spread bacteria and infection.”

Hand towels, on the other hand, should be washed every two to three days. “These towels are used by multiple people for a variety of reasons, which makes it even easier to spread germs,”  he says. And never (ever!) use a hand towel on your face (think of all the germs you’re spreading!). Any towel that comes in contact with your face should be washed after every use to avoid spreading bacteria to your pores.

These puppies that beautify us on the daily can harbor serious dirt, oil, bacteria and buildup, which can aggravate your skin. “Cleansing your tools regularly is the best way to prevent this buildup from causing problems such as acne and irritation,” says Dr. Schlessinger. “Not only does regular sanitizing kill bacteria, but it also helps your brushes last longer and provides you with the best makeup application.”

You should aim to spritz your brushes once a week with a cleansing spray like glo minerals Brush Cleaner and deep clean them once a month with a brush shampoo like jane iredale Truly Pure Shampoo & Conditioner. Dr. Schlessinger recommends discarding old makeup brushes after around six months.

Workout sneakers: wipe down after each class

Your trash can: once every two weeks

There’s a seriously good reason why you should wash your hands every time you take out the trash or even replace the trash bag—even if all those years of playing beer pong gave you impeccable aim. “Your trash can is likely covered in more germs and bacteria than you can even imagine, so it’s a good idea to, not only wash your hands after touching it, but also spray it down with disinfectant spray at least once a week,” Dr. Schlessinger says. “Then, once every two weeks or so, give the entire can a good scrub with a heavy duty cleaner like bleach.”

Most of these items—think: light switches, doorknobs and even your laptop—often go uncleaned and unnoticed. But they deserve (and seriously need!) a good cleaning, too. “Because there are only a few people touching these surfaces, you can wipe down doorknobs and light switches whenever you clean the rest of your house,” says Dr. Schlessinger. “In a public place, however, you should wash your hands often and avoid touching any communal surfaces, if possible.” Tip: After washing your hands in a public bathroom, use the paper towel you dried your hands with to turn off the faucet and open the door.

The same goes for your keyboard. If you’re the only one using it, it’s okay to only clean it twice a month. But if you use a public computer, wash your hands after every use. “It’s okay to use disinfecting wipes or alcohol to wipe down a keyboard, mouse and trackpad, but you should never use disinfectant spray or wipes that contain bleach,” Dr. Schlessinger says.

Your smartphone is one exception to this rule. If you look at your phone right now, you’ll probably see oily fingerprints and maybe even a thin film of makeup or sunscreen. But what you can’t see is actually more dangerous. “Because your phone is probably the thing you touch most throughout the day, it’s also likely the most bacteria-ridden thing you own.” (If you constantly seem to struggle with acne along your cheekbone, your phone is probably the culprit.) Try wiping down your phone with a disinfectant at least once a day, and if someone else touches uses your phone, be sure to wipe it down after they give it back.

A good rule of thumb is to clean your fridge out twice a week and eat, freeze or toss highly perishable food items (meats, dairy, etc.). Once every three months or so, it’s also a good idea to remove everything from your fridge and wipe down the inside. This is also a good time to check the expiration date on things like condiments. “Cleaning out your fridge is extremely important because contaminated food can spread listeria, a serious infection that has been linked to things like meningitis, miscarriages and death,” says Dr. Schlessinger. “The bacteria responsible for this infection can multiply extremely quickly in colder temperatures.”

Water bottle: after every use

This goes without saying, but you should never use your hand to open the pull-top of your water bottle—especially if you’re using it to work out. “This can seriously and quickly spread sweat, dirt, and grime and bacteria from the facilities into your mouth,” says Dr. Schlessinger. “Instead, find a squirt bottle or a bottle with a screw-on top. Water bottles create the perfect breeding ground for bacteria, so you should wash it in the dishwasher on high heat after every use.”